I just received the note below from our facilities maintenance department:


The Facility Maintenance Department is landscaping the interior perimeter of the track to address drainage issues, repairing irrigation lines as needed, removing the old rubber crumb track surface and installing the new track surface.  We may have the opportunity to install the new long jump pits as well, but this depends heavily on our strict time frame.

Work will continue for approximately 5 – 6 weeks.  During this time, access to the track is limited to construction workers and City employees wearing safety vests.  There will be one Drillers football game as scheduled on July 7th .

Once the project is complete, vehicles will no longer be allowed on the track for any reason.  When crossing the track with mowers, light trucks, tractors etc.. rubber mats will be available to place across the track surface.  Any and all vehicles including City vehicles will need to stay on the gravel path on the south side of the track or travel in the grass areas on the exterior perimeter of the track. Please ensure that summer staff without email access are aware of these changes.

Feel free to forward this email to affected user groups throughout the City of Grande Prairie.  Thank you for your patience over the next few weeks.

Posted by Bill Given at 8:56 AM No comments:

Grande Prairie is the Youngest City in Canada

The demographic breakdown of our area from the 2011 census was released recently by StatsCan. The attached charts show how the city and county populations break down by age.

Both graphs are on the same scale to make comparison easier. 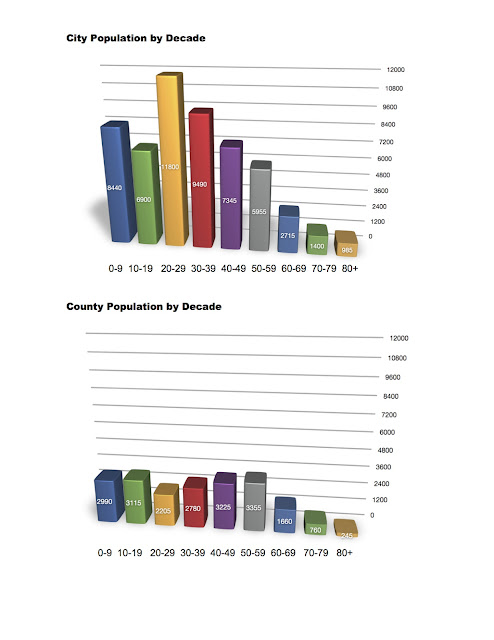 Some interesting ways I found to look at the data….

• Grande Prairie can legitimately lay claim to being the YOUNGEST city in the province.

• Grande Prairie is also  the YOUNGEST city in Canada over 10,000 in population.

If you include cities under 10,000, we are the fourth youngest behind only Lloydminster (the Saskatchewan side only), Martensville, SK and Iqaluit, NU.
If you broaden the list to include all communities (which includes counties and MDs) over 10,000, we are the third youngest community in Canada behind Mackenzie County, Alberta and Hanover, Manitoba

The skewing of our city's population obviously leads to some unique challenges (we're going to need more schools for sure - especially a the elementary level) but I believe it also is one of the reasons our city is so dynamic and active.
Posted by Bill Given at 8:13 AM No comments: