A pretty short agenda for tonight's council meeting, but it does have at least two interesting items:

The first is item 9.2.1 from Public Works - awarding a tender for road repairs on 98th Street in front of City Hall at a cost of just over $1 million. This section of road is easily one of the worst in the city. this section of 98th hadn't been upgraded because (a) we knew that there would be changes needed to the intersection at the entrance to the Montrose Cultural Centre and (b) because we were waiting for the 101 Ave couplet to go ahead. Now that the Cultural Centre is up and the Wapiti Dorm is down it's time to do the upgrades... even tough the couplet may not go ahead for a year or two.

The second item of interest is from the General Government Services committee, item 9.3.2. This is a motion to change the title of "Alderman" to "Councillor". I support the change mostly because it brings us in to line with what is more common across the country. In fact, the term Alderman has been even dropped in the U.K. where our system of local government comes from. Although Alderman is an old term I don't believe there's any real historic attachment to it locally. On top of all those facts, the Municipal Government Act (the provincial law that governs how cities are run in Alberta) says this on the matter:

So, even though we could choose to continue calling our council members "Aldermen" it seems more appropriate change to "Councillor".... unless we're going back to the days of The Men Who Run This Town


AGENDA FOR THE CITY OF GRANDE PRAIRIE COUNCIL MEETING JULY 26, 2010

11. DELEGATION BUSINESS
12. NOTICES OF MOTION
13. COUNCIL MEMBER REPORTS
Posted by Bill Given at 1:39 PM No comments:

One of the hot topics out there as we head in to the fall election is the city's purchase of the York Hotel. As it turns out the hotel is on the agenda for our regular General Government Services committee meeting this Wednesday. Staff are bringing forward a simple report to update council on what will be happening with the property over the next while. The highlights:

I know a lot of people who have been concerned that the building would sit as a boarded up eyesore down town and with that in mind I've been pushing to have this all happen as quickly as is reasonably possible. If everything goes according to the plan above I think it's fair to say that we've had a pretty rapid process & that will be good for downtown. 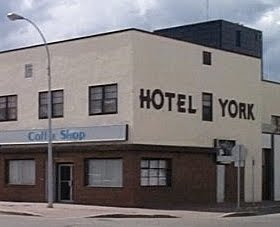 As for next steps... I believe we need to come up with a plan that will see a new building built on the site sooner, rather than later. I also think we need to do that in a coordinated fashion, rather than dealing with just this property in isolation from the rest of downtown. I believe we should be to open up the downtown enhancement plan and take a big picture look at the west end of the city's core because there are a lot of changes coming to that area in the next few years.

In addition to the changes at the York Hotel/Germain Park property, eventually the old Park Hotel will come down and the city will build the 101 Ave couplet that will cross through the area of the old Coca-Cola bottling plant. When you add all this up we have a chance to remake the face of our downtown, if we have a good plan that looks at everything together, rather than dealing with individual sections.

I would like to see more mixed use development (commercial on the bottom and residential or office on upper floors) in the downtown. I believe having more people live in the heart of the city adds life to the streets and provides a housing option that is in short supply in GP.

So this Wednesday we're getting an update on the work that's been done so far and what's coming up shortly & that all looks well in hand. Now I want to see us get started on where we're going to go in the long term.
Posted by Bill Given at 1:24 PM No comments:

The architects of the Montrose Cultural Centre have been recognized with an award for their design of the building.

Of course the real point of the building is how it's used and what it means to the community. The increased number of people getting library memberships, making visits the gallery and enjoying the space show the true value of the building - but, it's also nice to know that the great things we have here in GP are also recognized outside of our city.
Posted by Bill Given at 9:26 AM 1 comment: