The City of Grande Prairie is encouraging the public to take part in a process to help name the Third Fire Station.

This is the first time residents have been invited to participate in the naming of a City fire facility.

The two existing stations bear the names of historical community figures. The North Hall is named after William Salmond – an area pioneer – and the South Hall recognizes Pete Eagar – the first full-time Fire Chief of the Grande Prairie Fire Department.

“This is an opportunity to involve citizens in a positive, community-building experience,” says Dan Lemieux, Fire Chief. “We want to celebrate the contributions of our founders.”

Residents can send an e-mail to thirdfirehall@cityofgp.com with a nominee and a rationale of 100 words or less explaining why the Third Fire Station should be named after that person.

A safety related prize will be awarded for the winning submission!

“The Station doesn’t necessarily have to be named after a fire-related figure,” says Rick Adair, Project Manager of the Third Fire Station. “The Grande Prairie Fire Department appreciates the role all our community builders played in shaping the city.”

The deadline for nominees is September 15. City Council will have final approval of the Third Fire Station name.

So, this isn't city business but I know people are interested in the state of healthcare in our city and the province so when I got notice of this in my email inbox I thought I'd share it. I've put the important sections into a BOLD font.

If you have any questions or comments, I CANNOT ANSWER THEM: Please direct them to the health advisory council at:


Dear Community Stakeholder:
The Peace Health Advisory Council would like to invite and engage with all interested individuals and groups to attend either of the health care forums we are hosting in July and August to provide input on local and regional health and provide feedback to Alberta Health Services regarding health care services in our North Zone.

Part of our mandate as a health advisory council is to engage the public to gather opinions, concerns, bright ideas or suggestions on gaps and opportunities and to share success stories related to health care services and to relay the messages to Alberta Health Services.

The forums will be an excellent opportunity for the Peace Health Advisory Council to gather feedback from the public. The open mike format will be utilized with each speaker allowed two to five minutes to present their information. We will be happy to accept any written presentations whether as supporting documents or as the entire presentation. Additionally, should you wish to present to the Peace Health Advisory Council at a regular council meeting at a later date you may request an opportunity to do so. The information we receive from the public forums will be condensed into an advisory report to Alberta Health Services regarding local ideas, opportunities, challenges and opinions.

We are very interested to hear your opinion regarding health services. Please be advised the Peace Health Advisory Council does not have the mandate to deal with individual patient concerns or the day to day operations of the health centres but rather works in an advisory capacity to Alberta Health Services.

Please join the members of your Health Advisory Council on either date to share your ideas and provide feedback about health care in our area so that we can ensure that we convey your message to Alberta Health Services.

BMX Site To Be Ready By August

Located west of the off leash dog park in the South Bear Creek section of Muskoseepi Park, the site was chosen for its high visibility, availability of space, and accessibility from park trails. It’s also adjacent to neighbourhoods and schools. The bike park will be completed in about three weeks.

“The BMX park was made possible by the generous support of Wapiti Gravel Suppliers which delivered and levelled over 10,000 cubic meters of soil and Genivar providing free design consultation, engineering and surveying services,” says Laurie Barry, Operations Manager at Muskoseepi Park.

A ribbon-cutting ceremony to officially open the facility is scheduled for Park’s 25th Anniversary event on the August long weekend. 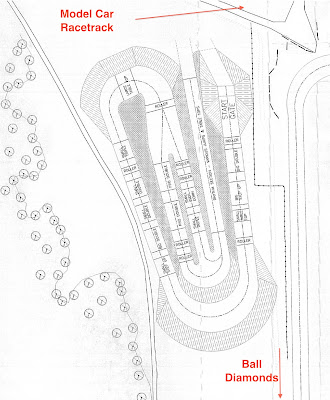 Posted by Bill Given at 9:26 AM No comments: