At tonight's council meeting there is a motion to reconsider council's previous direction on the fate of the historic Prairie Art Gallery building.

About 1/4 of the building was lost when the roof collapsed in March 2007. Since then it's sat open and exposed to the elements while it's fate has been bounced around and the insurance issues have been sorted out. Late this summer council passed a motion directing staff to seek permission from Alberta Culture & Heritage to demolish the building and begin construction of a new building on the site.

At the time I was the lone dissenting vote - As I said previously I really believe the building is important given Grande Prairie's limited amount of historical resources. Apparently the ministry feels somewhat the same as their response to the City's request seemed to indicate between the lines that restoration was the way to go. The building expert the minister sent to inspect the site was pretty clear in his report that the building was still very salvageable.

I think the motion to move forward with restoration and reconstruction will pass easily tonight given the letter from the minister and out-pouring of support old high school building we've seen over the last few weeks. 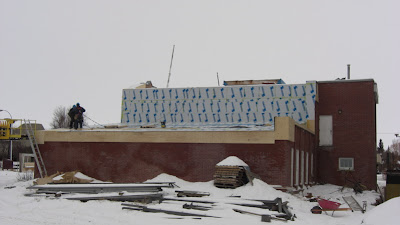 The collapsed Prairie Art Gallery building (finally) gets a temporary roof to protect the structure while it's fate is decided. 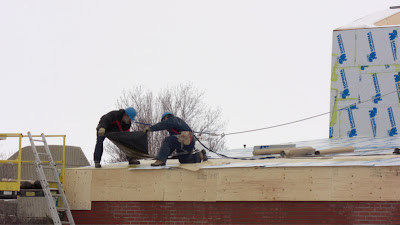 Workers installing the roof on the old gallery building. 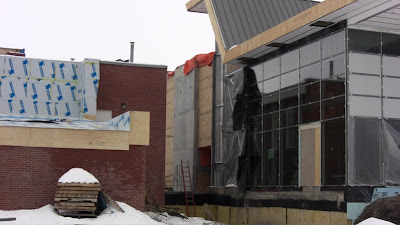 This picture shows the connection area where the new cultural centre is supposed to connect to the old art gallery building. The connection hasn't been built yet because of the uncertainty of what would happen to the old building.
Posted by Bill Given at 12:19 PM

best of luck with your motion to reconsider

Good for you to advocate for preservation rather than demolition, Bill. The North has so few historic buildings that we need to do what we can to keep the few that remain. The building is intergenerational for me--my mother went to school there and I did, too, when it was one of the college buildings.