I'm not sure if people real realize just how cool The Multiplex is going to be. It seems like a lot of people think of it as "the new pool" and that leads to picturing an updated, bigger, version of the Leisure Centre.

The reality is that it's much, much more than that. It really does have the potential to be a regional tourist draw.

I'm not saying that people from Calgary are going to decide that they need to drive up just to check it out but I do believe that people from the north and the region around the city may do just that. I also think that after families stop in once they will start to make it a regular part of their visits to the City. Just like my family used to stop in at the wave pool in Millwoods and then the water park at WestEd when we would go down to Edmonton.

With features like a tube slide, adventure river and surfing machine all set in amongst a fantasy dinosaur theme, kids and parents alike are going to love it.

Check out the pictures and tell me you're not excited too.... 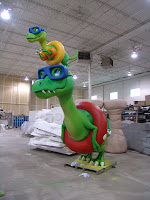 The much anticipated Dinosaurs for the Multiplex are finally arriving in Grande Prairie! The first shipment of the Multiplex’s prehistoric pals, are now onsite at the Multiplex and installation will begin in late June.

Cheryl McKenzie, Multiplex Marketing Manager says “This is one of the most exciting parts of the overall aquatics area. The personality that these playful dinosaurs display is just amazing. In the children’s vortex area the dinosaurs are cute, colourful and friendly. 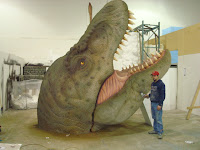 There are 6 perched on Hoo Doo’s surrounding the kiddie’s area, and they are equipped with goggles and life preservers just ready to splash in the pool. There are 3 more surrounding the family hot tub and volcano. Further back in the giant slide area beside the lazy river the dinosaurs are more realistic looking. We have a giant T-Rex head that is breaking through the rock facade over the change rooms and a couple more are on the island in the Lazy River. In addition the theme includes waterfalls, foliage, 4 pterodactyls, dinosaur rib cage and murals depicting some of the prehistoric aquatic life. The City wants to support the exciting new dinosaur opportunities that our region is becoming known for and The Multiplex is the perfect place to put that theme to good use. Though the Dinosaurs at the Multiplex in no way represent those found at Pipestone, they will certainly help get visitors and locals alike in the ‘Dinosaur Frame of Mind’.”

The Dinosaurs were designed in Calgary at Studio Y Creations and have taken over a year to develop. Studio Y has taken the Dinosaur theme to a whole new level while remaining considerate of all ages of our patrons.

“It is going to be so exciting to show off the Multiplex to everyone. It is definitely a one of a kind facility that won’t fail to impress anyone who comes to visit us!” adds McKenzie.