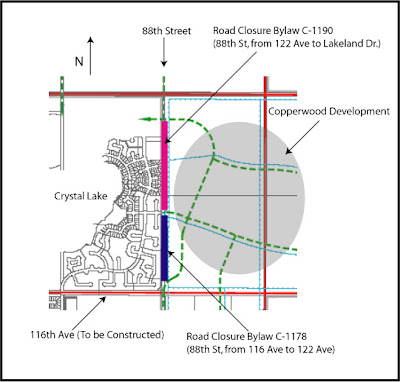 I've had a few people contact me with concerns about the condition and future of 88th Street which runs down the east side of GP past the Crystal Lake neighbourhood. Questions are often like this one I received via email:


"... can you tell me the plans for 88 St? I thought it was to be moved over ½ mile. Is there a time frame for that? The dust is so bad that we can’t sit outside and it is really affecting my asthma. There are so many big trucks using it that it gets torn up pretty bad."

Since this is a pretty important topic for those living in the area I thought I'd do a little up date on what been happening and what we can expect to see for 88th Street in the next year.

The map above is a detail from the Northeast Area Structure Planwhich was adopted in 2003. Area Structure Plans (ASPs) show the general details of how an area is going to develop and include where the transportation networks will go. In the picture above the new roads are the dashed green lines. ASPs are just one of the planning documents that the city requires for new development. In this case the new development is the Copperwood neighbourhood which is just east of Crystal Lake - if you drive up there you'll notice that there are the first signs of new roads and some fencing going up.

At Monday night's council meeting we will be looking at two bylaws dealing with closing portions of 88th. The first is Bylaw C-1178 which covers the closure of 88th from 116th Ave to 122nd Ave (in blue above) and the second is Bylaw C-1190 which covers from 122nd Ave to Lakeland Drive (in pink above). Once the roads are closed the developer will put in the new roads including 116th Street running south of Crystal Lake and the new "Copperwood Drive" (approximately the green dashed line that winds north/south just east of 88th) - I believe work on both of these has started.

88th will stay open to traffic until the new roads are constructed. When they are the developer will divert traffic to the new routes and 88th will be closed and turned in to a grassed laneway, or alley with a walking trail through it.

As I mentioned work has already started on the new roads and city staff tell me that the developer hopes to have the new roads in this year. Of course that depends on how much work the asphalt contractors can get done this summer, so it may not happen as quickly as we'd like but it is going to happen.

So, for those people who back on to the north part of 88th street change will be coming soon, no more cars or big trucks, no more dust and in fact no more road!
Posted by Bill Given at 9:48 AM