There's a lot of change happening in our community. In fact change has become such a prominent feature of Grande Prairie that sometimes I enjoy just driving around to see what new building has popped up or what new business has opened! I've often thought that it was a shame no one was documenting these changes.

One of the fun things about being on council is that we know where things are about to happen. On the private sector side we approve plans for neighbourhood designs and commercial developments. In the public sector we see the project proposals, often help find land for them and sometimes even fund them directly.

I decided to put a little of this knowledge to use in the summer of '07 by taking "before pictures" of sites that I knew would see some massive changes shortly. I should point out that I was really inspired to do this by the work of Beth Sheehan. Mrs. Sheehan documented much of the community in the early eighties by taking pictures of businesses and street corners all across the city. Beth's photos are at the South Peace Regional Archives.

So, here are photos showing the development of just a couple of the new public buildings being constructed: 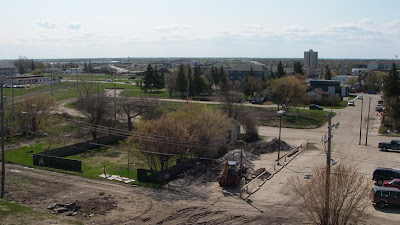 This site is directly south of City Hall, just behind the Care Centre and Aberdeen Place. 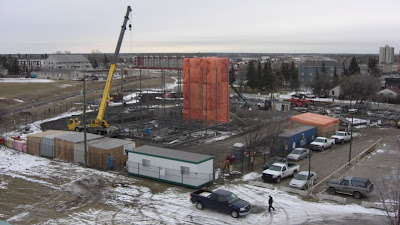 Today construction is in full swing on the land city assembled as a site for Rotary House - the replacement for the aging Wapiti Dorm homeless shelter. 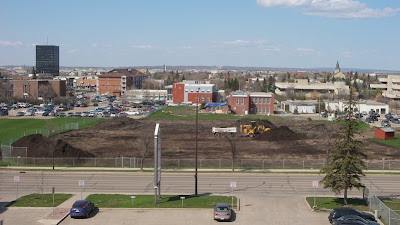 To the West of City Hall earth-work is just underway on the site of the former Montrose Junior High School. 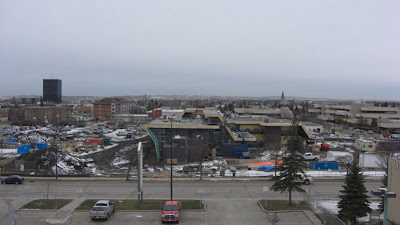 The new Montrose Cultural Centre is nearing completion and will be ready for it's grand opening in 2009 when this replacement for the Library and expansion of the Art Gallery will host the Lieutenant Governor of Alberta Arts Awards.
Posted by Bill Given at 1:00 PM

Construction Pictures: Library/Gallery & Rotary House is great. I don't know what else to say. Best. Product. Ever!