The blue marker shows the intersection where the lights are down
What would happen if we took out all the signal lights in Grande Prairie and instead relied on drivers to work with each other through 4-way stops?

As per the release below, the traffic signals at the intersection of 99th Avenue and Resources Road (the Royal Bank intersection) have been down for a few days now. It's a change for sure and I know that it will take some time for people to get used to - but is it really a bad thing? I haven't found it too difficult to navigate and it seems like traffic is moving pretty efficiently. (let me know what you think by taking the poll on the right side of the blog)

A few years ago a friend pulled me aside to say that he thought that GP had waaaaay to many traffic lights. He implored me to think about finding ways to build safe streets without putting up more lights. At the time I wasn't sure what the alternative was but now looking at how the traffic is behaving with that set of lights down I can see that moving away from standard traffic signals might be possible. 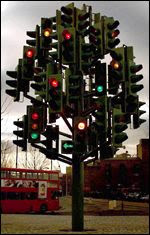 In fact this idea is getting a lot of a attention across the pond in Europe. There they are taking the concept even further, calling it "Shared Space" and taking away all traffic control signs, lights and markings from entire towns and villages! The early results show that accidents have decreased - people are suggesting that drivers pay more attention and drive slower. From Der Spiegel:

"Drivers will force the accelerator down ruthlessly only in situations where everything has been fully regulated. Where the situation is unclear, they're forced to drive more carefully and cautiously."

Read this Entire Article for more and view the basics behind Shared Space here on YouTube.

So, is GP ready to jump on to the Shared Space bandwagon? I'm not so sure about that. But I do think drivers can be more careful, take more responsibility and that we can draw on some of the lessons from Europe as we build our community.

Motorists are advised it could take up to two weeks to repair traffic lights at 98 Street and 99 Avenue and the City’s Transportation Services Department urges caution at this busy intersection.

Extensive damage occurred to the signals as a result of a motor vehicle accident on Thursday evening. One of the main poles supporting the lights was completely destroyed and its base needs repair.

The control cabinet was also demolished in the mishap.

“Repairs could take up to two weeks,” says Transportation Field Supervisor Brian Veitch. “A new cabinet and pole will have to be installed. We ask motorists to be patient at this intersection.”

An all-way stop has been established at the intersection.
Posted by Bill Given at 8:53 AM

can't agree Given, stop signs are fine during none peek hours but when its peek driving time they do nothing but slow drivers down. in my area in Ottawa where I used to the live there was a pair of stop signs down this road that caused really big slow downs on the road. What the city did there to fix the problem was actually round-a-bouts, not the crazy ones you see over in England, but a controlled one with one lane, and it actually worked and sped up the area considerably. it may fall into the controlled space idea, but definitely not stop signs.

my theory is; they never put up a street light till enogh people are killed. stop signs only work in parking lots and small streets. Its too bad that most people slide through stop signs and think that a yellow light means speed up... but RED means STOP. lights save lives.

Drivers in G.P. are like robots. People get accustomed to the pattern that they take everyday and stop paying attention to the changes all around them. The lights downtown are on a timer so people get used to getting the green at say 102 St. and rolling through greens all the way to 98 St. I can't begin to count the people I have watched speed through the stop sign because they are counting on a green light and aren't paying attention. Wait a week, put the lights back up and watch people stop on green lights because they are used to a stop sign. The reason shared space works is because people don't know what to expect so they are forced to actually pay attention to what is going on around them. As for the lights in the city, taking out on set of lights won't affect much downtown but the timings actually push vehicles through fairly effectively so taking out all of them would slow things considerably.

Traffic light DO matter... and God knows the City planners in GP have a MAJOR fetish for them! Bill, next time you are driving around our nice, rough so-called By-pass - count the number of traffic lights. Now, imagine you're a truck driver, driving something with around 5-6 axles. Twelve to fourteen gears. How much fun would your lovely traffic lights be then? Remember - as a truck driver, you're paid only when you deliver your cargo to its destination, so time is money.

And how about taking a drive down 100 Street from 132 Avenue to 68th. See how many you can make it through consecutively (while maintaining legal speed). Nice synchronization. Frustrating as hell! Your traffic planner needs a size 11 swift kick in the junk!

Lethbridge has the best system for safely and efficiently moving traffic all of the lights all on main roadways go to flashing yellow after around 9 oclock and all of the other lights flashing red so people can just stop and go.

Wah wah wah......I can hear people crying already. "They are taking them out in Edmonton because THEY DON'T WORK!". Implementation and design is key in success. How can THE REST OF THE WORLD BE WRONG??? Dawson Creek has one and it works fine. Traffic Lights are a pain in the butt, they cause noise, and create more air pollution.

I think with the high volume of traffic @ that intersection, it needs lights. More than lights perhaps more enforcement. Missed a goldmine not putting redlight cameras on 99 & 100 ave @ 98 st

There could probably be less traffic signals in the City; but they do have their place. We just need to keep in mind that there isn't just one solution for all problems. There are a tone of different methods out there for dealing with traffic.

FYI you should look into "naked streets" there's probably a tone of literature on the 'net about the idea...

To give you a head start, here's an article from the UK:

Fewer lights is certainly something to consider, Bill. When Peace River was having new traffic lights installed on Main Street, we had 4-way stops for weeks and many people I spoke to really liked this. The drawback that one person noted, however, was that pedestrians had more difficulty safely navigating the wide intersections (4 lanes--we have a very wide street).

You'll need to come to Peace River to see how our new roundabout is working. Now that people are getting used to it, it's actually pretty slick, and I've heard lots of people say how much they like it compared with the old 5-way intersection with lights (very confusing). Many people still haven't yet got the idea of signalling when going in, around, and out but with just one lane around, it's less of a problem than with 2-lane roundabouts. It will be even better once the final lift of pavement is added--there's been a ridge all winter that has made driving a bit more challenging.