Please Sir, Can I Have Some More? 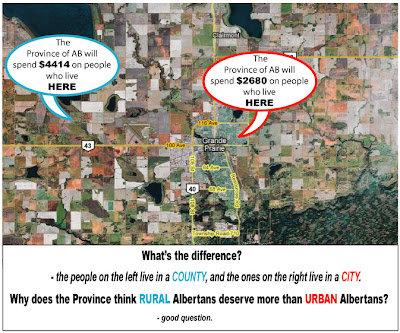 The province has published the numbers on it's new Municipal Sustainability Initiative program (MSI). The goal of MSI is to give more money to municipalities and it is greatly appreciated...

It means tens of millions of dollars for Grande Prairie but after taking a closer look at the numbers it appears to be weighted in favour of rural municipalities with a strong industrial base, such as the County of Grande Prairie.

Over 10 years, Grande Prairie is expected to receive $134.6 million under the formula which is distributed on the basis of 48 per cent due to population, 48 per cent to assessed tax base, and four per cent to length of roads.

That same formula will give the county $79.3 million.

But when the totals are broken down into pure per capita distributions the county, with its high tax base but lower population, over 10 years will receive $4,414 per person while the city will get just $2,680 per person.

This is not fair to Albertans who live in cities. This is a clear example of rural municipalities getting more and there are many examples of how they have to pay less. Here's one I've written about.

I'm not in any way saying that rural municipalities deserve less than urban ones, I just think we should all be treated equally.
Posted by Bill Given at 1:33 PM