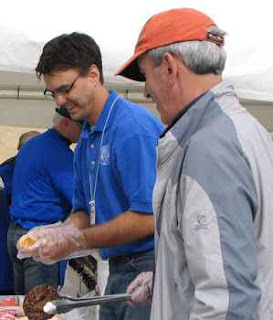 It's Municipal Government Day (MGD) time again! In my first year on council (waaaaaay back in 2001) FCM sent out a notice encouraging municipalities to observe MGD in their communities. The idea was that it's a way to invite the public to see the inside of municipal operations at least once a year, hopefully giving them a better idea of all the things the city does.

It makes sense if you think about it - lots of the services cities provide are taken for granted if you don't have to use them. For example, it's easy to forget that your tax dollars go to pay for the fire department if you've never had a fire. Or in GP's case that the Airport is owned by the city.

Something we wanted to add to the day was a celebration of the work that our staff do. Municipal staff often work under the radar and council at the time decided that MGD was an opportunity to shine a little light on all the work they do. It's also used as a chance to meet with other local governments in an informal fashion. The MGD committee's terms of reference reflect this:

1.2 Activities must highlight the fundamental role the City of Grande Prairie plays in
sustaining and improving the quality of life in the community, including:

So along those lines we set up the first MGD and have been doing them ever since. Kids come to city hall for tours and at the (always popular) community barbecue people can see everything from Street Sweepers to Fire Trucks to Transit Buses and Graders first hand (another kid favourite!) Plus council and staff get to serve the community as chef on the BBQ. It's always a great time.

Funny thing... I'm pretty sure we are the only municipality in Canada to do it. It doesn't have to cost much and it's a great chance to "open the doors to city hall" so I don't understand why others haven't taken the opportunity. If anyone out there would like to know more about GP's municipal government day I'd be happy to send along some info ... and, if you are celebrating MGD, prove me wrong and send me a note!

Regional municipal leaders will participate in games from that era as part of Municipal Olympics, a fire truck used at that time is part of the City and Aquatera equipment display and entertainer Stan Foster will perform songs from the late 1950s and 1960s.

In addition to the ever-popular community barbecue from 4-7 p.m., the event features an array of activities for the younger set, including themed inflatable bouncers, face painting, air brush tattooing, and balloon animals.

The Grande Prairie Marching Band will perform in its final tune up before touring China for pre-Olympic cultural events this summer. Residents can check out a variety of display set up by City departments and local organizations and enter free draws.

“We welcome everyone to join us at this celebration,” says Alderman Elroy Deimert, Chair of the Municipal Government Day Team. “We have much to be proud of in this community as we mark our 50th anniversary and this is a great occasion to meet neighbours, enjoy some local and provincial entertainment and learn more about our City.”

Prizes for children’s art contests will be awarded during the event.

Activities commence at 4 p.m. with the Municipal Olympics and the community barbecue. The event runs until 7 p.m., rain or shine. Activities will be moved inside if the weather is inclement.


Media enquires may be directed to:

David Olinger
Manager, Marketing and Communications
538-0349
Posted by Bill Given at 9:22 AM