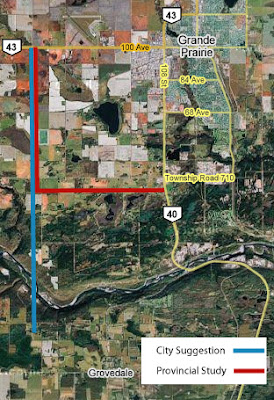 I made a note of the open house that the province is holding to review the functional sudy of the "South West Road". I thought I should post a picture of the alignment that the City is suggesting.

I received this note from our public works department today.

"FYI – Administration has gone on record (both by formal letter and officially noted at the meetings), to say that we believe that the best alignment for this Resource Road is to go as directly south of the Highway #43 Bypass as possible, with a second Bridge Crossing across the Wapiti River, rather than creating an east-west road that parallels the existing Correction Line."

From what I understand this suggestion still isn't being considered by the folks running the study, because they don't consider it to be a part of the terms of reference of the study.

Here's the reasons I think it should be considered:

1. Provides a 2nd bridge across the Wapiti. There's lots of heavy traffic on that thing and safety is a big concern, a second bridge is going to be needed eventually and having these two appart would reduce the amount of traffic on highway 40 north of the river.

2. Protects the sensitive Wapiti Nortdic Ski trails. I mentioned that in the previos post.

If you agree with me make sure you make it out to the open house. If they don't talk about this idea - bring it up.