One of the parts of the FCM conference that can be either; 'Really Good' or 'Really Bad' is the Municipal Expo trade show. I should say that it's always "neat" but it seems like some years you walk around seeing the same (big) consulting firms, government agencies and providers of fine street lights and playground equipment.

Other times you'll see something on the floor that really tweaks your interest and has obvious uses back home that are immediately apparent. This year there were at least three that fell in to that later category.

Here's some various pics from the trade show floor. Some show the variety of displays and products while a couple are the ones I found really useful that I hope I can bring back to apply to our city..... 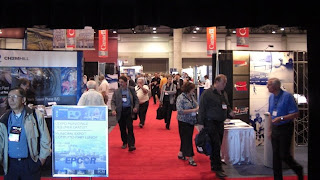 The entrance to the Municipal Expo 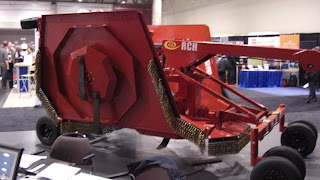 This gigantic mower is probably of more interest to rural municipalities who have to maintain a lot of ditches. 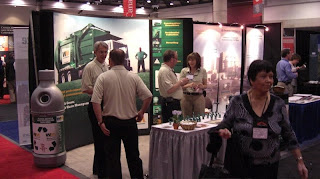 Here's a company that is at every conference; Waste Management... 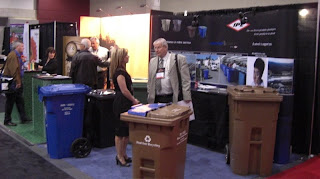 ... and right across the isle from WM is a company that manufactures bins. What a coincidence! 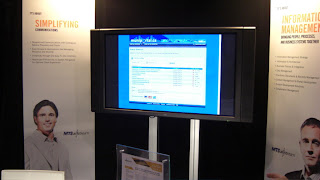 I thought this was really cool. This is the booth for mtsAllstream and you might recognize the image on the screen. They are using Grande Prairie's very own Muniportal.ca site as a promotional tool. They were only promoting three different "case studies", each in different areas of their business so obviously if Muniportal is good enough to put in the booth we must have something cutting edge. 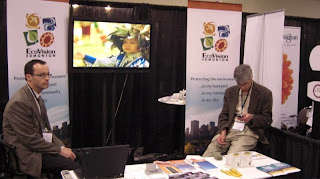 In a previous post I mentioned Edmonton's Co2RE team, here's their booth. 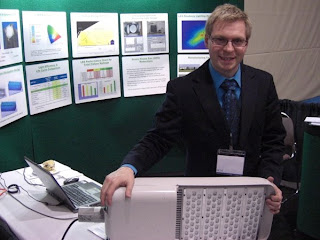 This was really cool... LED street lights. You probably know that LED lights last a lot longer and consume less energy than traditional lights. That's a big deal when you taxes go to pay for the electricity bill those lights generate. GP has already converted most of the traffic lights (Red, Yellow & Green) around the city to LED. The next thing is these LED streetlights that Curtis Cartmill with LED Roadway Lighting is showing off. I want to see us move our system to these kind of lights to save some money. 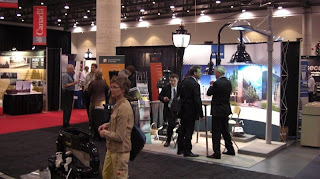 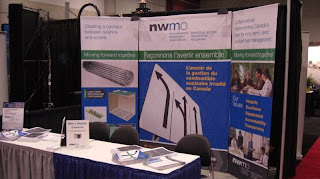 I thought this was a really in interesting booth... the Nuclear Waste Management Organization. I kept my distance. 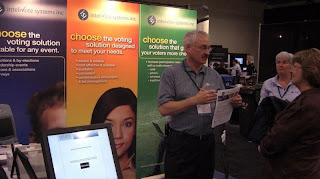 This was a sight that warmed my heart ... our City Clerk, Janette Furgeson talking with the folks from Intelivote Systems. If you've read this blog you know I'm a big proponent of moving towards internet voting as other cites have done. Well Janette is in charge of all the municipal elections for the city so she needs to know this stuff. I'm going to do more of a post on this topic and some of the stuff I learned at the booth later.

These next two are of something that immediately piqued my interest and made me think of at least one area where we need to use the product. This company (MCM Structures) sells a product that looks like a decorative bottom to a streetlights, only it's not. 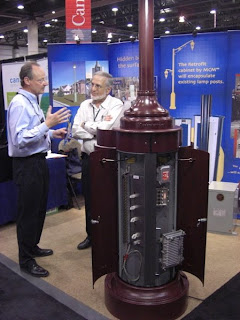 It's called the MCM Base and when you open it up it is actually a junction box that can hold phone, cable and electricity connections for up to six homes. 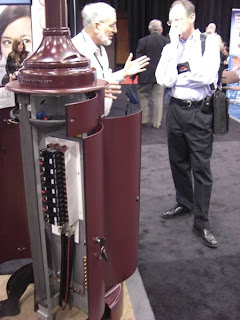 This is another view of the open junction box that the streetlight actually sits on top of but they make actually make another product that is for retrofits to existing street lights. It's called, not surprisingly, the "Retrofit". When I get home I'll take a picture of a spot in our city where these need to be used.
Posted by Bill Given at 10:55 AM