Last night at council ( webcast here - high speed internet recommended) I reported on my visit to Yellowknife for the Prospects North conference.

In my report to council I mentioned that there were some very good ideas at conference and that I would be bringing them forward for use in Grande Prairie. The largest and potentially most important of these ideas is the Community Energy Plan.

The City of Yellowknife had a booth at the conference trade show promoting their Community Energy Plan, which they've been working on for a number of years. I stopped by and had the pleasure of speaking to Mark Henry, who is the Energy Coordinator for the city. He explained the process that the community went through in collecting the data, developing the plan and how they are working on moving forward.

The thing that struck me most was the poster that he had at the booth, which shows all the energy inputs for Yellowknife and where that energy is used. It's the City's Energy Profile. Mark was nice enough to email me the poster, which you can see below. (click the picture to see it larger) 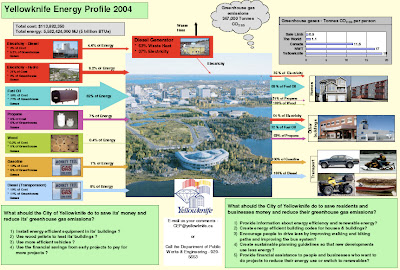 Looking the poster anyone can very quickly see that:

Collecting this data is only the first step in developing a plan. The next part is deciding on actions but having these facts so clearly stated means that, wether your interest is in reducing greenhouse gasses or saving money, you know the best place to start is by working to find alternatives to fuel oil.

What would we find out by doing the same work in Grande Prairie?

I can see many ways that this type of information could be useful for the City of Grande Prairie, local businesses and residents. But, first, someone has to get the ball rolling and I'd like to do just that. Unfortunately, last night was our last full council meeting before the election. So, I committing that in the new term I will work to see the City (with community partners) begin the process of developing a Community Energy Plan.

My hope would be that the City would lead the process and invite members of the public, business and environmental groups to participate. The funding for the development of the plan would come in large part from grants like FCM's Green Municipal Fund with a smaller portion coming from the City of GP.
Posted by Bill Given at 9:00 AM

Thanks very much for posting this item, Bill. How exciting that some cities are already looking at the idea of community energy planning and that you want to get started on this for GP. It's an issue I'm interested in looking at for our community (Peace River)and, I hope, as a Town Councillor after the election!