Off To The Real North

I'll be getting up a little extra early tomorrow to catch a plane to Yellowknife for the Prospects North Conference.

From the City's Media Release: 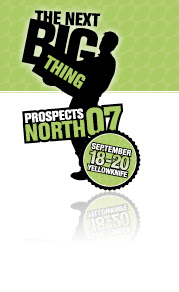 Three members of City Council and economic development staff are part of a Peace Country delegation participating in Prospects North 2007 next week in Yellowknife.

Themed The Next Big Thing, the Sept. 18-20 event is focused on the economic future of the North. It will examine untapped economic potential in areas such as mineral resources, power generation, communications technology, manufacturing, as well as cultural and environmental businesses.

“There is a strong foundation in our community based on oil and gas, forestry, agriculture, our position as a regional shopping centre and as a general economic hub. Now is the time to identify other opportunities for growth to complement these sectors.”

Prospects North is a great opportunity to connect with other community representatives from Alberta, the Yukon, Northwest Territories, and Nunavut, says Lacasse. “This is a key event as it’s the largest business and investment conference in the North, giving us a significant showcase for the city and region.”

Prospects North is expected to attract 500 delegates and 100 trade show exhibitors. A ‘regional village’ will represent communities and economic development agencies throughout the Peace Country.

The regional village is actually a number of organizations with booths, side by side by side making what basically turns into a Peace Country feature area. In addition to the City other Peace County groups in attendance will be:

It's a great way to sell our region. Myself, Alderman Croken and Alderman Heath are representing City Council at the conference.
Posted by Bill Given at 10:03 PM