Many people have noticed the additions being made to many GP intersections - red light cameras will be running in the city soon. Questions about the system have started popping up on my FaceBook Group and group member William V has even posted some pictures of the new units - this is one of his below....

This exchange between Branden and myself might be of interest to more people in the city so I thought I'd share it... 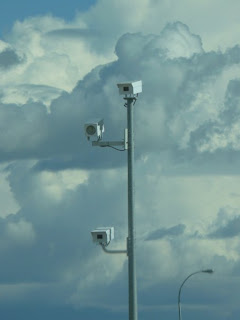 "Branden Johnson Posted - I'm just wondering, are they going to publish some info on how these are going to work in the paper? or online. When will it take your picture, if your in the intersection when the light is green waiting to turn, and waiting, and waiting, then the light turns yellow and some idiot runs the yellow/red are you going to get a ticket too? or will it allow you to proceed un-ticketed? I'm gonna be angry if I get a ticket without knowing all the facts. Angry at myself for not finding out."

"Bill Given Replied - The city has published info about the cameras, including where they are, and how they work. You can check it all out here:

Here's the key point on "how"

"5. How does the red light camera enforcement system work?

The system uses multiple cameras placed at the intersection to record video evidence of the red light runners. Using time and distance calculations, the system predicts that a vehicle will run a red light and then activates three independent video cameras. These cameras capture video evidence of the rear of the vehicle, the license plate, and a video showing the vehicle behind the stop line while the light is red and then proceeding through the intersection while the light is still red."

So, it looks like if you get "trapped" in the intersection the system should take account of that.

Anyhow, there's your info on Red Light Cameras!"
Posted by Bill Given at 12:53 PM

I am thinking that the city of Grande Prairie will take advantage of these lights and punish the wrong people, instead of the actual crooks.

Not sure if issuing a ticket to someone who puts someone's loved ones at risk should be considered punishing the wrong person. If you stop for the red light you will not have to worry. Police are responsible for public safety which encommpasses more than just criminal activity.

These red light cameras were a good idea except that they have a flaw, i recieved a red light ticket when i believe i should't have.Please tell me how we the common people are suppost to come to a complete stop behind the line on icy roads? Because i couldn't stop i kept going and got a ticket for it, next time i will make sure that i come to a sliding stop in the middle of the high collision intersection.